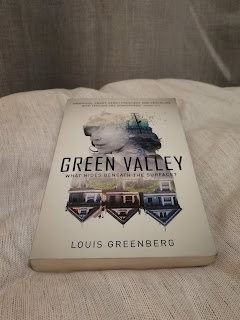 Green Valley - Louis Greenberg
Photo from when I finished reading the book.

Have you ever had one of those books you picked up because it looked interesting, even at the expense of it possibly being cliché? This was one of those books, and I'm pleased to say my expectations were thoroughly blown out of the water.

Green Valley predominately follows the character of Lucie Sterling, a Stanton police officer who wants to find answers about her missing niece. But it won't be easy. Invasive technology has been banned, there's no big companies holding data on private citizens, or phones tracking their every move. Green Valley is different - its inhabitants have retreated to the comfort of full-time virtual reality. Inside of Green Valley, beyond the ideal virtual world it presents is where Lucie will have to go to get her answers.

I was immersed from the beginning, and had I had the time, I'm sure I would have read it in one sitting. The atmosphere and description really made me feel like I was with Lucie as she navigated Stanton, and Green Valley. A techno-terror, that had me on the edge of my seat and surprised in all the right places.

There were a lot of characters that I really connected and engaged with. It was so refreshing to read a strong female character, who was strong because that was who she was, and not for the sake of a man. Come to think of it, a lot of the important female characters in this story were strong and definitely carried the narrative in their own ways. They said a lot, without having to have to write a backstory for each of them.

However, there were certain characters I struggled to really care for. For example, Lucie's boyfriend Fabian was mentioned throughout, and whilst the way he was mentioned fit into the story, I couldn't see the moment where his motivations changed. There was another character, who was particularly important, but his backstory was only briefly mentioned, and honestly until writing this, I completely forgot half of what brought him to that point.

There were parts in this book I struggled to distinguish the narrator. Greenberg uses a first person narrator, which was good until you switched perspective. This was tackled by the change in perspective by then writing it in third person. Whilst this didn't happen very often, it was enough for me to notice it and withdrew me from the story in what I felt were crucial moments.

Overall, I highly recommend that you read this book. It's unique, immersive and has a few unexpected twists and turns. A techno-thriller, with mystery and engaging characters and plot points.

Thank you for reading this review!